What Our Clients Say…

They did a very good

They did a very good job they were very polite cleaned up afterwards great attitude in every single one of them thank you so much guys.

Back deck repaired from a fire.

George got right on it. I had called another company but they said they would be there in August to give me an estimate. Then I called Ace Service, George was out the next day to see the damage and write up an estimate. The next day he emailed me the estimate and I asked “When can you start”? They started the next Tuesday taring out the top of the deck. They found that the rest to the deck had to come down. So the continued the next day and soon I had a new deck. It looks great. 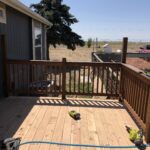 Leave Us A Review!